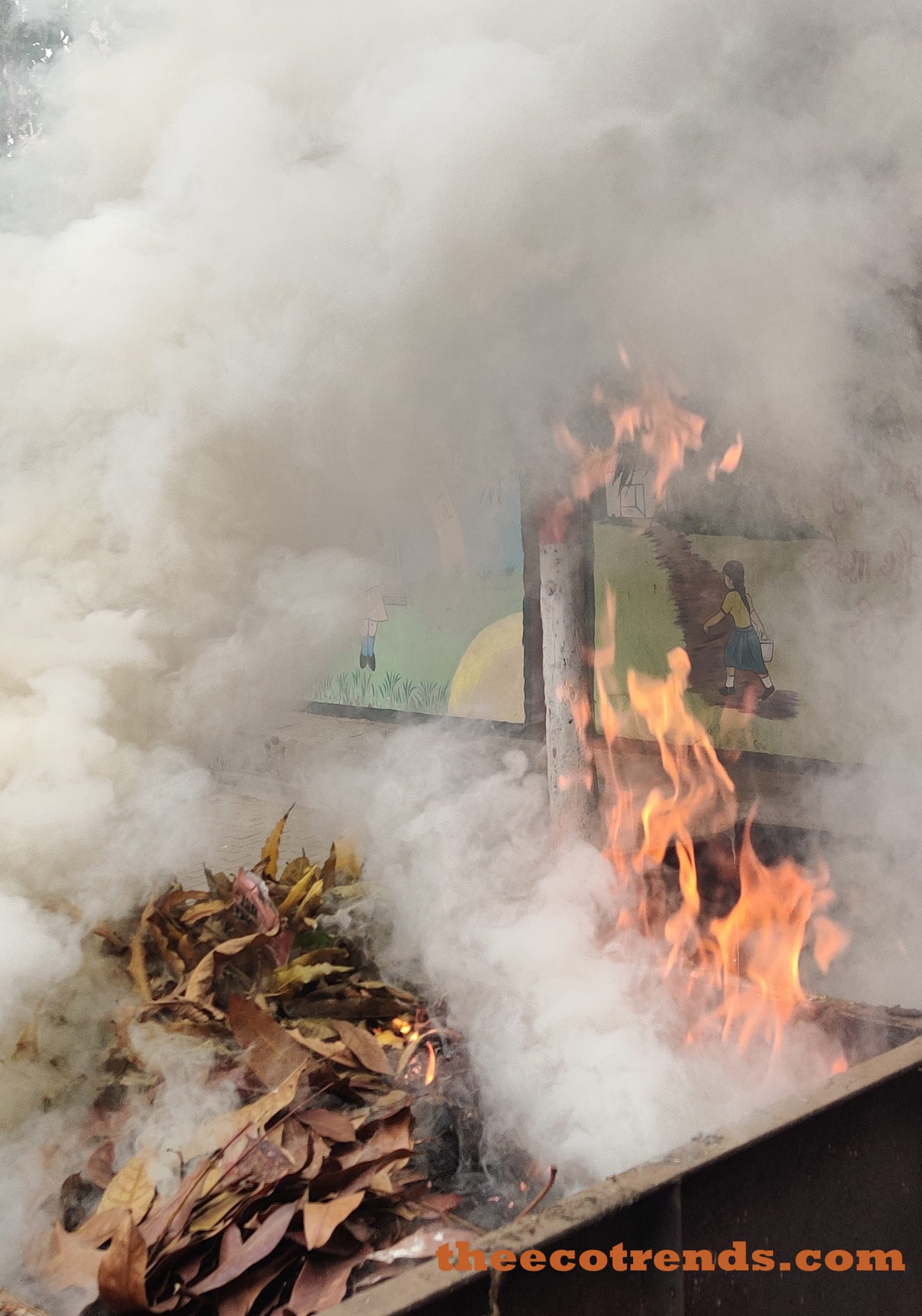 Every autumn brings beautiful hue and colour to the skyline through annual metamorphosis of plants and trees visible in the form of new leaves.

At the same time dry leaves fall to the ground and cover the entire floor.

It is reported that about 30 million tones of dry leaves are dumped into landfills every year in America. In India most of these leaves are either burnt on the floor where they fall or collected by poor people and stored for burning during winter season to generate heat.

Many poor families use to store these leaves as fuel for cooking food. Though this is gradually becoming the story of olden days as the Government of India is providing cooking gas to poor either free or on subsidized rates.

Worldwide, these fallen leaves account for about 75 percent of the total solid waste on the earth.

Biologically, leaves act as solar cells. It is because they receive sunlight and convert it into chemical potential energy. This energy is stored in the food prepared through the process of photosynthesis.

Leaves fall down on ground surface after completing their life spawn. These leaves can be compared with tiny batteries containing significant quantum of energy. This energy can be harnessed to address the world’s ever increasing fuel demand. For this they can either be burnt directly or can be converted into ethanol to produce energy.

Direct burning of dry leaves is harmful for the environment. The gases released through burning of these leaves contribute to the CO2 load of the atmosphere.

Some researchers argue that leaves absorb CO2 during photosynthesis and reduce its load on the atmosphere on one time. On the second time when leaves are burnt the same carbon dioxide is put back into the atmosphere. Thus, burning of dry leaves does not contribute to the atmospheric load of the gas.

The above concept has been opposed at many places by many environmentalists across the world, and by the United Nations, and also by the Environmental Protection Agency, USA. These oppositions have emerged due to some crude realities mentioned ahead.

There is moisture inside leaves. When these leaves are burnt the moisture is released into the atmosphere. Since leaves burn slowly they generate numerous airborne particulates like fine bits of dust, soot and other solid materials.

According to Wisconsin’s Department of Natural Resources, these particulates can reach deep into lung tissues and cause coughing, wheezing, chest pain, shortness of breath and sometimes long-term respiratory problems.

Leaf smoke may also contain hazardous chemicals such as carbon monoxide, which can bind with hemoglobin in the bloodstream and reduce the amount of oxygen in the blood and lungs.

Another noxious chemical commonly present in leaf smoke is benzopyrene. It has been shown to cause cancer in animals. It is believed to be a major factor in lung cancer caused by cigarette smoke.

The exposure of leaf smoke can irritate the eyes, nose and throat of healthy adults. Thus it can really wreak havoc on small children, the elderly and people with asthma or other lung or heart diseases.

Small fires caused due to burning of leaves can cause big problems of pollution. Individual leaf fires usually don’t cause any major pollution. However, multiple fires in one geographic area can cause concentrations of pollutants in air that exceed air quality standards.

According to the U.S. Environmental Protection Agency (EPA), several leaf and yard waste fires burning simultaneously in a particular area can cause air pollution which can be compared to pollutions from factories, motor vehicles and others.

Burning of fallen leaves here and there in surroundings has been a common practice for long. But most of the municipal corporations now days are banning or discouraging the burning of tree leaves due to air pollution by it.

In many Indian cities the Central Pollution Control Boards have taken up hard steps against burning of leaves in parks and roadsides. It is good that municipal corporations across the globe offer collection of leaves and yard wastes and use these to make compost.

Collection and burning of dry leaves has been a traditional practice in rural Indian houses since long. Rural ladies use to collect dead fallen leaves from the forest floor and store them in their houses as fuel. This fuel has surely been the cause of silent deaths of many rural ladies.

Herbs that Protect us during COVID-19

1 thought on “Burning of Those Dry Fallen Leaves of Trees”